According to reports, Garland announced his decision to appoint Hur at a press conference on Thursday, one day after discovering a second cache of classified documents hidden in Biden’s garage and adjoining room. The first cache of 10 documents was found by the president’s attorney in Biden’s office at the Penn Biden Center in Washington, D.C., earlier this week.

John Lausch, the U.S. attorney for Chicago, recommended Hur to Garland. Garland tapped Lausch after ten classified documents were discovered in Biden’s D.C. office. Lausch began an initial investigation into the handling of the documents, reportedly from Biden’s time as vice president.

Reports show Hur is a former federal prosecutor who worked for Democrat and Republican administrations at the Department of Justice. According to his biography, he will leave his current position as a partner at the law firm Gibson, Dunn, and Crutcher, where he leads groups specializing in white-collar defense and national security.

According to a report, Hur worked as then-Deputy Attorney General Rod Rosenstein’s right-hand man in the DOJ before serving as U.S. attorney for Maryland. He served as Rosenstein’s “point person” overseeing then-special counsel Robert Mueller’s investigation into the Russian collusion hoax of the 2016 presidential election.

From 2007 to 2014, Hur was an assistant U.S. attorney in Maryland, while Rosenstein was the state’s chief federal prosecutor. From 2003 to 2005, Hur served as counsel and special assistant at the Department of Justice before serving as counsel to current FBI Director Christopher Wray and as assistant attorney general in charge of the DOJ’s criminal division.

Does anyone think the DOJ is going to prosecute Biden for this? 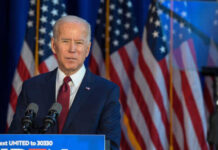