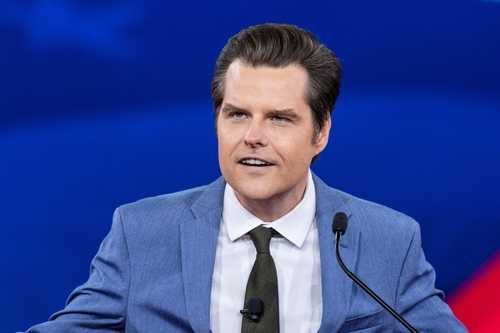 (RoyalPatriot.com )- A Democratic strategist has voiced their support for an amendment that will be presented on Tuesday by Republican Representative Matt Gaetz of Florida. If passed, this amendment will allow the cameras used by C-SPAN to cover regular floor sessions in the House of Representatives.

Karen Finney, a spokeswoman for Hillary Clinton’s unsuccessful presidential campaign in 2016, told CNN anchor Jake Tapper that she has to admit, “I never in a million years imagined I would be saying this,”  that she was in complete agreement with Matt Gaetz on this particular point.

“I actually do think it was good for the country to have more of a view into what was happening, how it happened, and frankly, how their own members were behaving throughout the process,” Finney added.

According to Fox News, Gaetz made the announcement on Tuesday that he will propose the amendment to the House Rules package that was approved on Monday. He stated it was time for a change from the “boomer-fied” fixed places typically seen on C-SPAN. The amendment stipulates that there must be a minimum of four cameras, all of which must be operated by the cable network functioning within the House of Representatives.

According to a Matt Gaetz post on Twitter, “Broader transparency in Congress is a net plus, and we need more of it.”

Tapper, addressing Finney, said that during the beginning of the 118th Congress, C-SPAN cameras provided a window into the House proceedings. During this time, they captured Republican Rep. Matt Gaetz and Rep. Paul Gosar of Arizona having conversations with Democratic Rep. Alexandria Ocasio-Cortez of New York. These conversations took place during the protracted process that led to Rep. Kevin McCarthy’s election as speaker on the 15th ballot.

Tapper felt this was important for the public to observe and said, “Congressman Gaetz, we’re behind you on that issue.”